What is a Systematic Review?

Some systematic reviews will involve meta-analysis which is a quantitative method used to synthesize and summarize results.

What does it take?

Time: a systematic review takes commitment as the process can take several months to years.

Creating a GANTT Chart can assist in meeting timeframes.

A supportive team: systematic reviews cannot be done alone. You need to work alongside:

The hierarchy of evidence

Systematic reviews are the “Gold Standard” in research.

It is important to understand the hierarchy of evidence when undertaking research as this indicates the quality or strength of evidence. 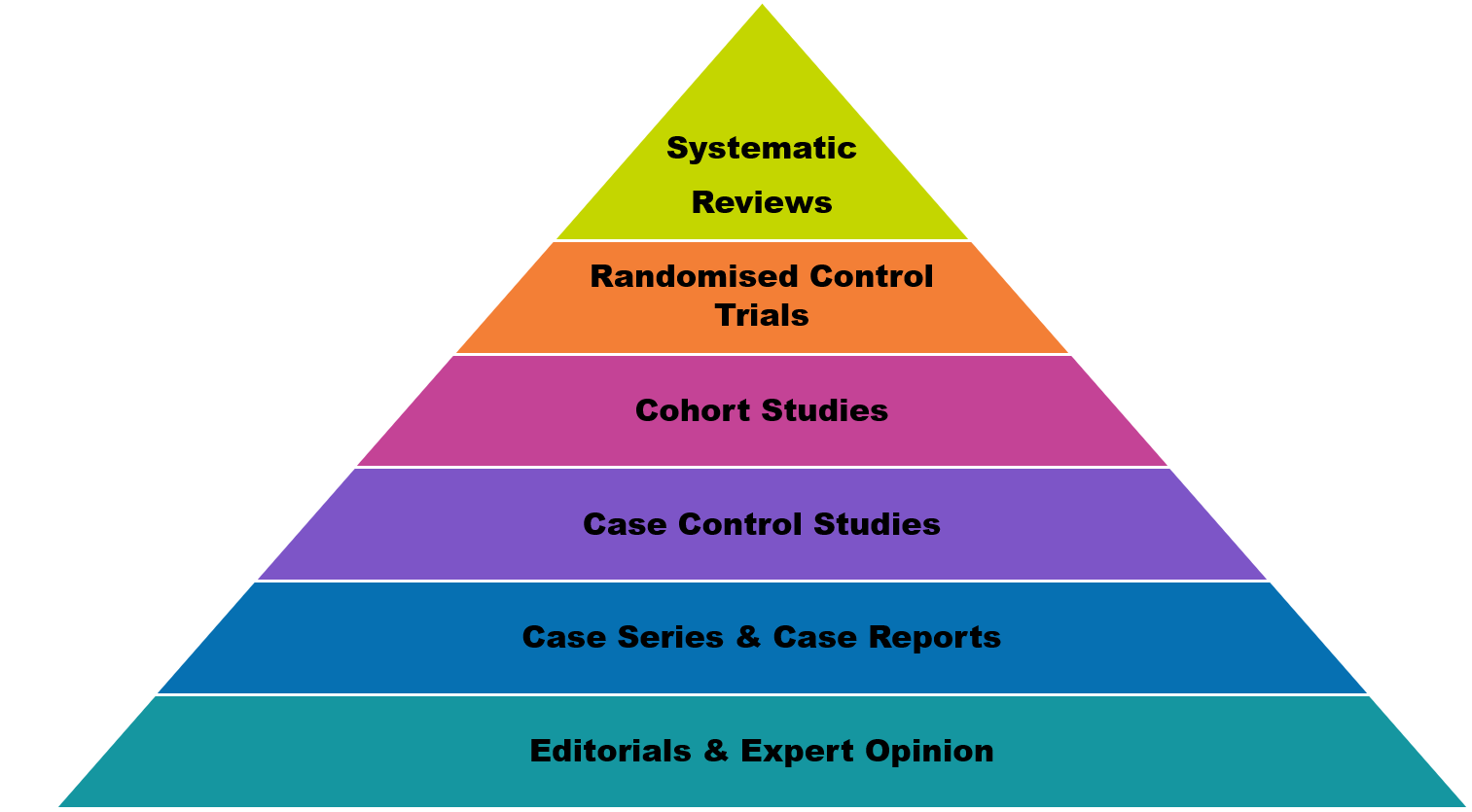 The application of strategies that limit bias in the assembly, critical appraisal, and synthesis of all relevant studies on a specific topic. Systematic reviews focus on peer-reviewed publications about a specific health problem and use rigorous, standardized methods for selecting and assessing articles. A systematic review may or may not include a meta-analysis, which is a quantitative summary of the results.

An epidemiological experiment in which subjects in a population are randomly allocated into groups, usually called study and control groups, to receive or not receive an experimental preventive or therapeutic procedure, manoeuvre, or intervention. The results are assessed by rigorous comparison of rates of disease, death, recovery, or other appropriate outcome in the study and control groups.

The analytic method of epidemiologic study in which subsets of a defined population can be identified who are, have been, or in the future may be exposed or not exposed, or exposed in different degrees, to a factor or factors hypothesized to influence the probability of occurrence of a given disease or other outcome. The main feature of cohort study is observation of large numbers over a long period (commonly years) with comparison of incidence rates in groups that differ in exposure levels.

The observational epidemiologic study of persons with the disease (or other outcome variable) of interest and a suitable control (comparison, reference) group of persons without the disease. The relationship of an attribute to the disease is examined by comparing the diseased and non-diseased with regard to how frequently the attribute is present or, if quantitative, the levels of the attribute, in each of the groups.

A group or series of case reports involving patients who were given similar treatment. Reports of case series usually contain detailed information about the individual patients. This includes demographic information (for example, age, gender, ethnic origin) and information on diagnosis, treatment, response to treatment, and follow-up after treatment.

Articles or other publication presenting the opinion of the editor/editors or publishers.

Identifying the need for a Systematic Review

Before committing to a systematic review, the recommendation is for researchers to undertake a scoping review, rapid review or literature review, if they have not already done so. This will assist in identifying if there is gap in the literature, whether the literature already available is able to assist in answering the question, or that a systematic review has not already been undertaken on the topic of interest.

Undertaking this process will also provide researchers with a snap shot of the volume of current literature and the evidence available on the research topic. The searches undertaken in the planning phase do not have to be as comprehensive.

Another important step to undertake at this point is to check registers for systematic reviews to identify research currently being explored or recently been completed.

The list below is just some examples of where you can locate current and completed systematic reviews.